Every so often the fishing gods look down upon us! Two seasons ago we had the pleasure of having an oil rig 40miles off Kwanza Lodge. We could not have placed it better ourselves- it was in a horseshoe canyon on a 1000m drop off- which means only one thing… BLUE MARLIN COUNTRY!

Fishing at the SSV Catarina was just out of this world. Hundreds of wahoo’s, thousands of dorado’s and millions of tuna greeted us every morning when we arrived. You could troll, spin, pop, jig, spearfish, flyfish, live-bait fish, whatever your heart desired, and in the end you were always rewarded with an amazing experience.

There is one day, amongst many, which stands out the most for both of us. It was Chenelle’s first offshore trip.

On this day we had father and son, Rico and Vincent Sakko, on the boat with the two of us. Chenelle came with to pull the by-catch of tuna, wahoo and dorado – a terrible job but someone had to do it! We arrived at Catarina at 7h30am and slowed down to trolling speed one mile from the rig. We put out a four rod spread (no outriggers needed!), two 50lb and two 80lb outfits, with conas. As we got alongside Catarina the left rigger popped and not even second later short corner started screaming off. A double header of blue marlin within 5 minutes of trolling!! Chenelle and I cleared the remaining rods, got Rico and Vincent harnessed up and proceeded to fight the fish. After some tricky boat manoeuvring and over-unders we had a problem, both wind-ons arrived at the boat at the same time as Rico’s fish decided to spoil our plans and swim in. We wired Vincent’s fish, gave the leader to Chenelle to hold and proceeded to wire Rico’s fish. Father and son double up 400lb blue marlin in the first hour of the day, at that point we thought our day was made. After all the celebratory high-fives and photos we put the rods out and began trolling towards Catarina as the marlin had taken us about 1.5nm off it.

We were all still shaking our heads in disbelief when left rigger went off again, after a total of 5min of trolling!! Everyone looked around in shock as if to say “who the hell is going to pull this one??”. Rico said “Chenelle your turn”. How lucky can someone be, having spent a total of 10min, in her whole life, trolling for marlin and here she was strapped into a 500lb fish. After some spectacular jumps and grey hounding the fish went deep. Chenelle did an amazing job for her first time pulling from a black magic and after a 40min fight we had the fish alongside. Some quick photos, a little bit of reviving and off she went. 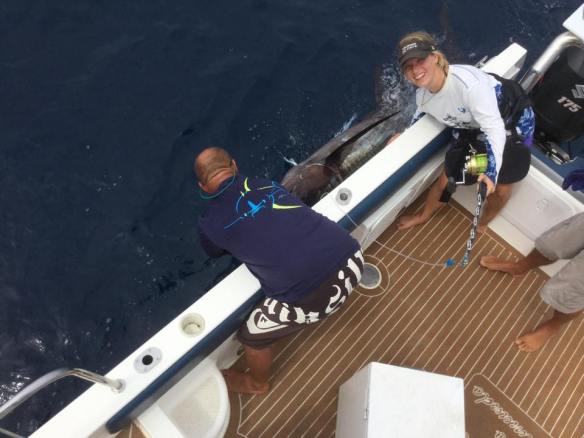 My previous best at the rig was three marlin in one day. It was now 9h30am and we hadn’t even hit the top of the tide! This fish took us a bit further off. As we got to the rig low and behold, left flat buckled over. While clearing the other lines another marlin followed right long. But we decided to focus on one of them for Vincent. He did a splendid job on the rod but after 30min into the fight you could see the effects of the previous fish taking its toll (he was only eleven at the time). As Rico got a wrap on the leader, the hook fell. Vincent was gutted but for us all it was a caught fish and he did an amazing job! Two blue marlin in one day for an eleven year old takes a lot to beat! By now everyone was sore and Rico suggested that I take the next one. Right there and then it was decided that if I was going to get one, it was going to be on a live bait.

We raced to the rig, dropped a jig, two winds later and we were on with a 4lb yellowfin tuna. We bridled it onto a big circle hook, Rico dropped it into the water and I went to put the motors into gear. Rico went berserk, the wind-on was barely out the rod tip and there was a perfectly lit up 450lb marlin. I ran to the back and proceeded to feed it, slowly started to push up the drag and went tight. We spent a total amount of 1min live-baiting! After an uneventful fight we released the marlin. It was 11h00am.

We still had the awful task of catching fish for the restaurant so we packed away the big stuff and put out our 20 and 30lb outfits. After having sufficient fish for supper, we decided to call it a day.

SSV Catarina in all her glory (PS. note the cookie cutter shark bite on the dorado, next to the bad gaff mark!)