Our first review will be quite an easy one… Seal Point Lures! 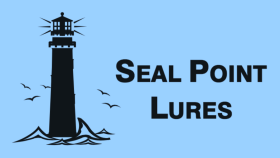 Seal Point Lures are made by Wayne Stanley, who resides in the Eastern Cape, and often puts his own tackle to the test on those infamous yellowtail at Cape St. Francis! Wayne putting his goods to the test!

Seal Point offers a wide variety of plugs from a tiny half ounce to massive 5 ounce plug, catering from a wave garrick to a giant kingfish. His plugs are sought after all over the world and have caught giant yellowtail in New Zealand, rooster fish in Mexico, kingfish in the Seychelles and are widely used all over the African continent. No angler should ever be without a Seal Point plug in his/her tackle box.

The specific plug which we will review is a 2.5 ounce “Flamingo Special”. This plug was designed specifically to fish the southern region of Angola, which often produces choppy and windy conditions. The slightly narrower profile and alteration in weighting makes casting into the wind a breeze without sacrificing action – something which plays a major role in hooking those elusive 20kg plus leeries. The “Flamingo Special” plug is also the perfect weight to accompany a 10/11ft spinning outfit, which is our preferred tackle for shore fishing in this part of the world. To date, the plug has accounted for 90% of the leeries, over 15kgs, caught at Flamingo in the last two seasons! The proof is in the pudding! It has also caught numerous shad, jack crevalle, bonitos, kawakawa and even an energetic kob. 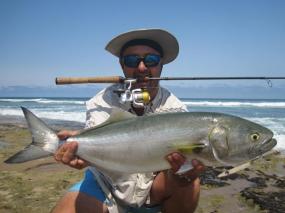 What makes Seal Point plugs special is the craftmanship that goes into each plug. Each plug is handmade and Wayne ensures that he is part of every step along the way. Every single plug produced by Wayne is nothing other than perfection, every weight is 100%, all the angles are equal, all wires bent identically, thus there is never a flawed plug! This means that when you attach a Seal Point plug on the end of your line you can have full confidence that your plug will not only swim perfectly but also maximise your distance as they are unlikely to tumble (if they do tumble, have a look at your swinging action, it might be too aggressive or too jerky).

Seal Point Lures are available in all major tackleshops. There are a lot of imitations out there but only one original. With over 20 years in experience, Waynes’ Seal Point Plugs, are un-matched in quality.

*** Please note that we are not sponsored by any of the tackle/brands that we review. Our reviews are nothing but a reflection of our own opinion. ***

One thought on “Seal Point Lures”